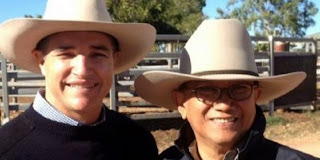 Barnaby Joyce , the politician from the Liberal – National Coalition leader Tony Abbott refuses Indonesia plans to buy a ranch in Australia . Candidates of the Australian ministers in the new government stated , this rejection has nothing to do with racial attitudes .

Coalition government actually do not have a clear position over the issue of foreign investment in the purchase of land in Australia , because throughout the campaign season and they have not issued a final policy plans related to this issue .
Indonesian delegation since March 2013 has visited Australia to explore settlement meat supply issues including the possibility of buying farm land .
State Enterprises Minister Dahlan Iskan said it has commissioned two state-owned companies plan to work on the purchase of a million acres of farm land in Australia . The goal , to overcome the problem of lack of supply of meat in the country .
The plan has been warmly welcomed the farmers in the Northern Territory ( NT ) which states , entry of investors from Indonesia will be the savior of the cattle industry due to sluggish Australian Government policy prohibits the export of live cattle to Indonesia .
However , Barnaby Joyce of the National Party who now elected to the federal parliament and is predicted as one of the candidates for ministers in the government of Tony Abbott , said he disagreed with the Indonesian plan .
” Australia’s foreign investment agency never claimed not to foreign investment . Agency I hope this can be assertive , to protect the rights of Australian citizens . Attitude can not be said to be a racial , ” he said .
The actual number of foreign companies have been operating in Australia , including in agriculture and animal husbandry . Chinese agriculture conglomerates such recently purchased farmland in Western Australia , including its port facilities for export of wheat to China .
Barnaby Joyce declared Australian citizens have questioned Indonesia ‘s plan and this will help convince Tony Abbott to reject Indonesia’s plans .
Party Barnaby Joyce , National Party , known as the conservative party base constituents in rural and outback Australia .

Obama : Assad Should Have Accountability for Chemical Weapons