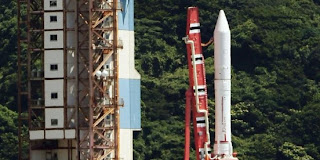 Japan has just launched a rocket into space satellites introduction named Epsilon. Kyodo said on Saturday (09/14/2013), Japan claims that the rocket is cheaper than the first edition of H2A. “Epsilon is also more efficient for sending satellites into space,“ said a statement by the Japanese.

Epsilon configured three levels. Now the rocket is in the Japanese Space Center in southern Kyushu. Rockets are actually already two months there. When test-launch a month ago, the rocket was delayed 19 seconds lantaram computer system disorders.

Epsilon is actually the second rocket made ​​in Japan. In 2001, Japan launched the H2A. Rocket first Japanese H2A rocket remains. But, H2A cost is fairly expensive to manufacture. Although, the Japanese government did not announce how much the cost of making the two types of rockets.

Sprint brings satellite named Epsilon–A. This is the first satellite with a telescope for observations of planetary design space.