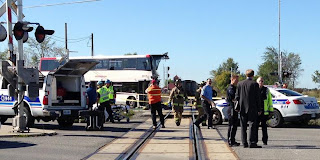 Six people were killed and 30 others injured in a crash involving a double-decker bus with a train in Ottawa , Canada on Wednesday ( 18/09/2013 ) . Bus driver became one of the six victims killed it . before the bus broke doorstop train , the passengers inside the bus was yelling ” stop ! ” . However , the bus broke through the barrier and fixed immediately struck by the train at 8:48 pm local time .
“The bus broke through the cross bar, then immediately struck by the train . Chaos immediately after it happened , ” said Mark Cogan , an eyewitness . As a result of the incident , the front of the bus suffered severe damage . Although damage was also on the train locomotive , no casualties of train passengers .
Authorities in Ottawa said 30 people were injured , 10 of whom are in critical condition . As a result of this incident Ottawa – Toronto train lines interrupted .
Accident involving a train this is the second accident within the last three months in Canada . Previously , a tanker train derailed and exploded in Quebec City on July 6, 2013 , killing 47 people and became the worst accident in the history of Canadian railways last decade .
Tanner Trepanier , a passenger on the ill-fated bus , said he and other passengers saw the train approaching when the bus he was riding in drove into a train crossing . “Everyone started screaming , stop , stop ! Because they saw the train coming , ” said one of the bus passengers who survived it .
” But the driver did not stop the bus , ” added Rebecca Guilbeault , which at that time was with her ​​one -year -old . A bus passenger named Gregory Merch said , crossing the train was in the corner with an angle of about 90 degrees .
Merch estimates signal the bus driver did not see the train coming and a sign that the gate was down . ” This collision was terrible . I could see bodies on the railroad tracks, ” he explained .
Head of the local transportation department , Craig Watson , said the bus driver ‘s death about 40 years old and has worked as a bus driver for 10 years . ” It was a tragic morning in the nation’s capital , ” said Prime Minister of Canada Stephen Harper in a statement .

A Man Destroys his BMW Car in Protest

US to extend some embassy closures...