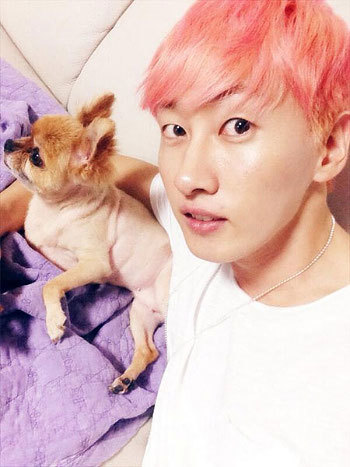 Eunhyuk is one of the members of Super Junior whose popularity has increased of late. For his performance in a variety show and a sub-unit with Lee Donghae, Eunhyuk increasingly recognized name in the world of international entertainment and Korea. This popularity also makes followernya on Twitter exploded.

Recently Eunhyuk Twitter account, @AllRiseSilver, break 2 million followers. Star of the show “Barefoot Friends” is expressed happiness over the achievement. He claimed to celebrate the moment with his dog.

“With Choco, naked, celebrating (Twitter) reached 2 million followers,” said Eunhyuk. In the photo, Eunhyuk looks with her ​​pink hair sitting next to his dog.

Eunhyuk is currently still busy following a number of activities with Super Junior. Not long ago, they promote SuJu concert film, “Supershow 4 3D”, which was released in August. Time attending the press conference, it was revealed that Kyuhyun Eunhyuk shirtless if the film will reach 10 million viewers.