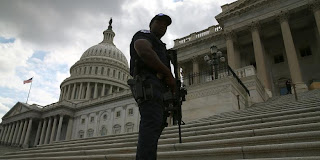 The number of victims of the shooting at the Navy base in Washington, United States, Monday (16/09/2013) increases. At the same time, the U.S. Federal Bureau of Investigation (FBI) has identified the perpetrators of the shooting.

Local police said that the death toll increased to 13 0rang. The actors in the list of dead. Police earlier said they hunt other actors, although the numbers confusing, between one or two people. Another offender is described as a black man, aged between 40 and 50 years old, and wore a military uniform.

The FBI identified the gunman who was killed at the location is Aaron Alexis (34), originally from Fort Worth, Texas. He previously was a worker at a military complex that handles the manufacture and maintenance of U.S. battleships. So far, the motive for the shooting has not been ascertained.

A series of consecutive shots rocked the American naval base and has created drama in the capital of the superpower. Milling about in the air on the helicopter, while security on Capitol Hill and the White House was tightened.

As a result of this shooting, a number of schools around the base was shut down. Reagan Airport flight through suspended. A baseball game between the team and the Atlanta Braves Washington Nationals are scheduled to take place in Washington on Monday evening was canceled.