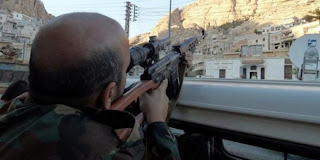 Jihadists and members of Islamist militant group is nearly half of the troops fighting the Syrian president, Bashar al-Assad. It is an abstract of a study published in the British defense Daily Telegraph, Monday (16/9).

The analysis was made consultant IHS Jane‘s defense, the full version will be published later this week, said the number of rebel forces in Syria about 100,000 people. But the rebels have been divided into about 1,000 groups since violence flared up two years ago, according to the study.

Of the rebel forces, according to IHS Jane’s estimates about 10,000 people are fighting for jihadist groups linked to Al Qaeda and the other around 30,000 to 35,000 a hardline Islamic group, which is different from the jihadists because they concentrated only on conflict Syria, and not on the global Islamic resistance.

“Rebellion is now dominated by groups that have at least the Islamic perspective on the conflict,“ said Charles Lister, author of the analysis, as reported by the Daily Telegraph. “The idea that the majority of secular groups led the opposition has not been proven. If the West looks as if not interested in getting rid of Assad, the moderate Muslims also seem to be pushed into extremism,” he warned.

The study was based on interviews with the militants and the intelligence estimate.