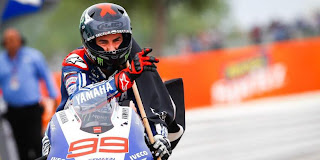 Jorge Lorenzo took his fifth victory of the season, having managed to finish first at the San Marino GP that took place in Misano Circuit on Sunday (09/15/2013). It also became his third consecutive victory at Misano.

Lorenzo thanked his team, who have worked hard to change the motor settings. He believes the change was a crucial impact on the race today. Evidently, he managed to finish in first position.

Lorenzo to race with Yamaha motorcycle that is equipped with an additional new technology, seamless gearbox. Spanish rider directly ahead of the second on the first lap, and never looked back after that.

Additional 25 points is slightly reduced the difference with championship leader Marc Marquez, who finished second in the race today.

“This is an important victory because we did not lose any points, but we can reduce the margin of five points.‘s The same result with Silverstone.‘s Not make a big difference in the standings. However, I am happy for this victory because we had a lot of trouble this weekend , especially in braking, “said Lorenzo.

27-year-old rider has shown progress when dropped on the warm-up session on Sunday morning. He admitted his team has made changes to the suspension on the braking system. “We made ​​some changes on the bike at the morning session (warming) and this makes a lot of difference.“

“So, I decided to use the same strategy as last four or five races, and I can do it, directly led from the start.‘s A very tough race physically because Dani (Pedrosa) and Marc (Marquez) never give up, with speed is constant. “

“I really want to thank my team because it greatly improves the quality of the motor during the race,“ he concluded.

Oezil Is Obsessed With Women’s Personal...

2-0 for Manchester United Vs Wigan...