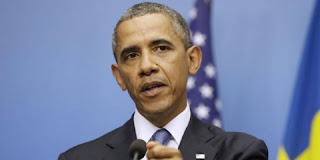 U.S. President Barack Obama said he would hold plan militarily in Syria if the country agreed to give permission for
international supervise their chemical weapons stockpile .

But he said he was skeptical of the Syrian government will approve it .While the U.S. Congress debated it necessary to attack , the Russian side on Monday ( 10 / 09 ) yesterday handed over its chemical weapons .
The United States accuses Damascus of committing war crimes , including the use of chemical weapons , a charge denied by the Syrian government .
President Obama on Monday gave a series of television interviews that aims to build support in the U.S. Congress and public awareness plans new military action in the Middle East .
The president said the attack is limited to punish the Assad regime is needed related to the use of chemical weapons and to prevent them from using the weapon again . ” I want to make sure that the norms against the use of chemical weapons ban is maintained , ” Obama told ABC News .
” It was included in our national security interests . If we can do that without a military attack , I really chose it . “
Asked by Diane Sawyer of ABC News if he delayed the attack on Syria , Assad could take control of his weapon , Obama replied : ” Of course , if it actually happened . “
Debate about the planned attack on Syria is still going on in the U.S. Congress at the moment .
Message from Syria
Support for the approval of Congress to attack Syria at the level remained relatively low . On Friday ( 06 / 09 ) and then , more than 230 of the 433 members of Congress in the House of Representatives reportedly refusing or likely to reject .
In addition , polls show that Americans remain concerned about the plan to attack Syria .This contrasts with the speech Secretary of State John Kerry who said support for attack on Syria increased .Many U.S. politicians and community members are concerned that the military action could pull the U.S. to engage in a prolonged war and triggered a wider hostilities in the region .
Obama’s statement came after Russia asked Syria to put a chemical weapons stockpile under international control and then destroying the weapons the U.S. military to avoid attacks .
Russian Foreign Minister Sergei Lavrov said the offer was made ​​during talks with his Syrian counterpart , Walid Muallem .
Lavrov later said he Muallem urged to ” not only agreed to put chemical weapons storage sites under international control , but also destroy it . ” He said he also told Muallem that Syria will have to join the Chemical Weapons Convention .
Muallem told reporters through an interpreter that Syria welcomes this initiative , and he praised Russia’s ” trying to prevent U.S. aggression against our people . “

Secrets of the Sun