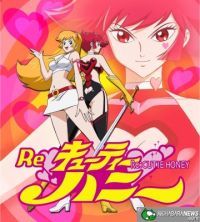 To commemorate 40 years since the birth of the “Cutie Honey” manga and movie series, “New Cutie Honey” OVA (original video animation) will be released on Dec 6. Before that, “Cutie Honey Complete” on Blu-Rray will be released on Oct 11. Fans are excited about the coming release. New material has not been released since the famous film, produced by Gainax, directed by Hideaki Anno and starring Eriko Sato and the 3-episode OVA series, also produced by Gainax, in 2004, and a TV series on TV Tokyo in 2007.

Created by Go Nagai in 1973, “Cutie Honey” is thought to be one of the first female heroes in a “shonen anime” series.

Cutie Honey – real name, Honey Kisaragi – seems like an ordinary girl in her real life, but she specializes in changing to different forms to fight evil when it comes. When she transforms into her true form, Cutie Honey, and yells “Honey Flash!” she can conquer the forces of evil.