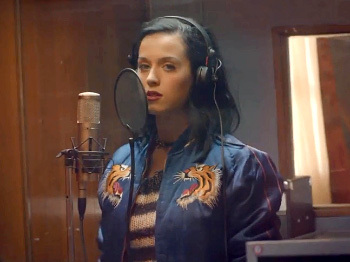 After Katy released the latest teaser ‘Satin Cape’, fans claim to want to hear the song ‘Roar’ or watch the music video.

Katy Perry showed a fierce and mysterious side in “Satin Cape”, the latest video teaser single “Roar”. Lover John Mayer was featured with blue jacket in the back there is a roaring tiger images.With a sharp look, Katy looks at the camera and be ready to sing in the recording studio. Shortly after that, there was footage of the song “Roar” with the lyrics, “I am a champion, you’re gonna hear me roar (I am the champion, you will hear me roar)”.

The presence of this latest teaser has just made fans can not wait to listen to the pop song “Roar” in full. The fans immediately expressed their reactions on YouTube KatyPerryVEVO.

“My God, you’re the best,” said Katy Meow. “I’ve heard a few seconds of ‘Roar’ and it has become my favorite song,” said Catherine McDonald. “I can not wait to see the video,” said under2723.

According to the plan, Katy will release “Roar”, August 12. This is the first single Katy mainstay for the album “Prism” that will be presented in October. Not only preparing a new album, Katy is also a collaborator for John song, “Who You Love”, from the album “Paradise Valley”.