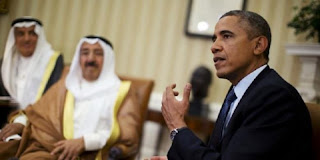 U.S. President Barack Obama welcomed the agreement reached America and Russia, Saturday (14/9),
which includes a framework to destroy chemical weapons Syria and he is an important concrete step.

However, according to Obama, much remains to be done. In a statement Saturday, he said the U.S. would continue to work with its allies and Russia to ensure that this process can be verified, that there will be consequences if Syrian President Bashar al–Assad did not obey.

The Obama administration accused Syria’s government to attack with chemical weapons on Aug. 21 that reportedly killed more than 1,400 Syrians. Obama urges military action against the Syrian government in response, but for a temporary delay while seeking diplomatic channels.

But Obama said in his speech, which was recorded on Friday, America has confirmed that the Russian-led initiative for a diplomatic solution should not be a “tactic for delay.“ He said Assad must take concrete action to show he is serious with the intention of handing their chemical weapons.

Shooting in U.S.A Navy, The Senate...