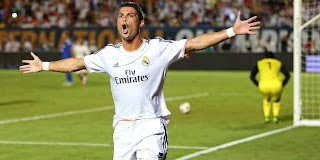 The Real Madrid star , Cristiano Ronaldo , official five- year contract extension that will keep him at the Santiago Bernabeu until 2018 . He also hopes to continue scoring goals for Madrid .

Madrid recruited Ronaldo from Manchester United with a value of 82.8 million pounds in 2009 . For four seasons , he succeeded in packing a total of 203 goals from 203 appearances in all competitions .
Here’s an interview with Ronaldo about his new contract and his future at Real Madrid , as reported by the U.S. .
What is the story behind the signing of this new contract ?President ( Florentino Perez ) and I mutually pledge to each other at the end of last season to this agreement . I always wanted to ( extend the contract ) and the President told me that he also wanted to do it .
Madrid supporter role so far ?Fans at the Bernabeu is very unique . But , not only in the stadium , across the city , too . They always showed me that they like the way I play and how I contribute to the field .
It is very important to me because when you feel loved by your peers , the President and the fans will also be easier to make a decision . I do not know if I will retire here . But , I’m going to try and play up .
Have you ever thought of moving to another club ?I never thought to leave Madrid because I feel very good here . It’s like my own . Everybody handle me well . This is a long process . But , all ended well and I’m very pleased .
What are your next targets ?We will try and try to win a lot of titles . I also wanted to try to score goals and assists as previous years . We will do our best as we can .
First you had to say was not happy in Madrid . Her response ?I think we had good times and bad times , and it was normal . Maybe I really was sad when it was . However , it is the past . Now I feel good , happy , and I wanted to do something as good as possible .
You rumored to be the highest paid player in Liga BBVA ?That’s not the important thing . In life sometimes things more important than money . Money is important , but it’s not a priority . The President wants to bring in the best players in the world and that includes myself . The club is ready to win more Champions League and other trophies . So , this was not just a matter of money .
What is your assessment of the performance for four years at the Bernabeu ?I do not like to judge myself . But , I think it was a great four years . I ‘ve worked so hard to be like this now . But , I think I can still continue to grow . You can always perform better and learn a lot . I am an ambitious person and I do not limit the limit in me . I want to score 200 goals again .
In two years , you successfully beat the record of Raul and Di Stefano . Her response ?I think the record is made to be broken . It was not a priority because it all happened naturally . The main thing now is to win the title .
What about the players who left Madrid in the summer ?Nothing new . Players come and go . It all depends on the President . We have an opinion , but it’s just between us ( the players ) . Madrid is always trying to bring in the best players and it has been done by the club .
Regarding La Decima ?Sooner or later we will win it . I think it could happen this year .
About Manchester United ?To be honest , Manchester United has given me many things and I will never forget them . However , United is the past . Now this ( Madrid ) is my home and my family here . I’m very pleased .
I respect every club . But , I want to be here in the next five years and also to win many titles . I’m pleased . I will do my best in the field and help my comrades as usual . I want to score goals for them .

Lorenzo : Thanks For My Team

Oezil Is Obsessed With Women’s Personal...