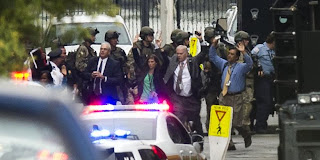 Shooting at Navy Military Base in Washington, United States, has forced the tight security in the U.S. Senate. The Major League Baseball game was also postponed because of this attack.
Shooting that occurred on Monday (16/09/2013) morning local time killing at least 12 people.

“I‘ve talked to the sergeant at arms, related events at the Navy Yard, we will enforce the Senate recess until tomorrow morning,“ said Senate Majority Leader Harry Reid on Twitter on Monday.

Meanwhile, the U.S. Senate’s sergeant at arms, Terrance Gainer, said in a statement that no one was allowed in and out of Capitol Hill, Senate building, within two hours after the shooting. Location of military bases and the building is less than three kilometers.

“Given the uncertainty surrounding the shooting at the Navy Yard this morning, and in particular the possibility of other suspects are still there (which is not paralyzed), we have decided to lock the Senate complex,“ said Gainer.

“We do not have any information to suggest the Senate, members, or staff (that they are) in danger. Yet from the side of prudence, we feel this is the best course of action to keep everyone safe.“

Meanwhile, the Washington Nationals baseball team website announced that their game against the Atlanta Braves are scheduled to take place in Nationals Park, not far from the military base, was postponed.

“We are all in the Nationals organization also saddened by the tragic events that occurred on this morning, just a few blocks from Nationals Park,“ the statement said. “Our thoughts and prayers remain with our friends at the Navy Yard, and those affected by today’s events,“ the statement continued. “Seeing his condition, we have decided to postpone the game against the Braves tonight.“

FBI Identify The Shooter at the U.S. Navy Base