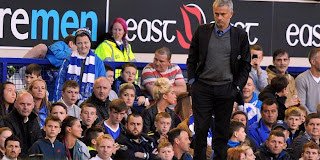 Chelsea coach Jose Mourinho did not assess his team did not reach a maximum and a decent point against Everton, in the Premier League at Goodison Park on Saturday (09/14/2013).

The match ended 1-0 to Everton. Goal scored by Steven Naismith in the 45th minute +1.

According to the Premier League, Chelsea match all six shots bead of 21 trials, while Everton created five chances out of ten businesses.

“We are releasing 21 shots and did everything we could, but a team that has a chance like that and not get a decent goal to lose,” said Mourinho.