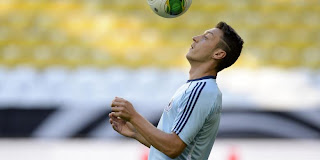 “Mesut find his world and he became obsessed with her​​. An alien world with him before,” said Perez in articles published abc.es.

“It’s not about women only. However, about the middle of the night activities and spending time with no sleep. He is not a good professional,” he continued.

Suspected it makes Perez took off Ozil on the last day of the summer transfer window of 2013. Perez would explain the lack of professionalism Oezil reported income and expenditure as well as the club when he met with the director of Real Madrid at the end of September.

Oezil anchored to the Emirates Stadium for a fee of 43 million pounds, making it the most expensive player of all time Arsenal.