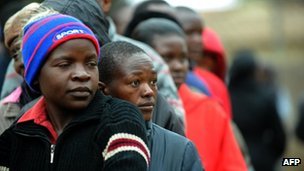 Members of Zimbabwe’s opposition MDC party say they have been attacked by followers of President Robert Mugabe.

The allegations come a day after official results from Wednesday’s poll gave Mr Mugabe a seventh term in office and his Zanu-PF party three-quarters of the seats in parliament.

Eleven people in Harare and around 20 from Mashonaland province say they were attacked by known Zanu-PF supporters after the results were announced,

The MDC has called the poll fraudulent.

Its leader, Prime Minister Morgan Tsvangirai, has vowed to take legal action to contest the results.

He has also said his Movement for Democratic Change (MDC) would no longer work with Mr Mugabe’s Zanu-PF party and would boycott government institutions.

The two parties have been in a coalition since 2009, after the last election sparked widespread violence.

The 11 people who claimed they were attacked in a township in the capital Harare sought refuge at the MDC party headquarters on Sunday, the BBC’s Brian Hungwe reports from Harare.

Both they and those from Mashonaland province allege that they were attacked by Zanu-PF supporters who went door-to-door ordering MDC supporters and their families to pack their bags and leave.

An MDC spokesman, Douglas Mwonzora, said the attacks were well planned. But a spokesman for Zanu PF, Psychology Maziwisa, denied his party was attacking opponents.

The MDC warns that it may not be able to control its angry supporters if the reports of attacks continue, our correspondent reports.

The party has appealed to the Southern African grouping, Sadc, to intervene to prevent the situation getting out of control, he adds.

Some in the MDC have called for a campaign of civil disobedience to isolate Zanu-PF.

Mr Mugabe, 89, won 61% of the vote in the presidential poll, against Prime Minister Morgan Tsvangirai’s 34%.

Results from the parliamentary election also handed the MDC a defeat. It won just 49 seats compared with Zanu-PF’s 158.

The US and UK have expressed concern at the poll results amid the opposition’s claims of electoral fraud.

But the Jacob Zuma, president of regional power South Africa, extended his “profound congratulations” to Mr Mugabe and urged all sides to accept the outcome.

On Sunday, MDC party treasurer Roy Bennett told the BBC’s Newshour programme that there was a “seething anger simmering across the length and breadth of Zimbabwe… for the fact that they have had their rights stolen.”

He condemned Zanu-PF as “a bunch of kleptocratic geriatrics who should have retired long ago”.

Asked about possible mistakes that the MDC had made, and about the quality of Mr Tsvangirai’s leadership, Mr Bennett hinted that “nobody’s indispensable” and that current events “will deal with those who have been exposed as not having the people’s interest at heart”.

Monitoring groups disagreed over the conduct of the election.

The most critical account came from the largest group of monitors, the Zimbabwe Election Support Network (ZESN), which had 7,000 workers observing the vote.

The organisation said problems with voter registration had left up to one million people unable to cast their ballots, mostly in urban areas regarded as MDC strongholds.

On Saturday, one of the nine members of the election commission resigned over the way the election was conducted.

Commissioner Mkhululi Nyathi said in his resignation letter: “While throughout the whole process I retained some measure of hope that the integrity of the whole process could be salvaged along the way, this was not to be.”

However, the African Union, which had 70 observers, said its initial report suggested the election was “free and credible”.

The AU’s mission chief Olusegun Obasanjo said there had been “incidents that could have been avoided” and asked Zimbabwe’s election authorities to investigate claims that voters had been turned away from polling stations.

The southern African regional bloc, Sadc, with 600 observers, broadly endorsed the election as “free and peaceful”, but said it would reserve judgement on the fairness of the process.

Mr Mugabe has been president since 1987. He became prime minister when Zimbabwe won independence from the UK in 1980.

Have we found the real Mona...