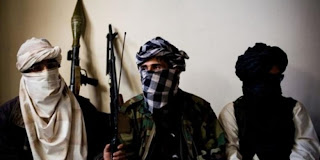 Maj. Gen. Sanaullah , with Lieutenant Colonel TOUSEEF , who also died , was visiting the province of Khyber Pakhtunkhwa to inspect border post when their vehicle hit by a bomb .
In a separate attack on the same day , two soldiers were killed in a bomb attack in the Waziristan region , also near the Afghan border .
While in neighboring Bannu , miltan Taliban stormed a police convoy and killed two police officers .
The series of attacks on security forces was launched simultaneously with the Taliban statement that the government welcomes peace talks with Pakistan but followed a number of requirements .
One requirement of the Taliban was the withdrawal of all troops from the tribal areas and the release of all Taliban prisoners .
No details
Last week Pakistan’s political parties have reached an agreement to hold talks with Pakistani Taliban militants , although no details of the time and the parties will be included .
Pakistam Prime Minister , Nawaz Sharif , has confirmed the latest attack on Pakistan’s security forces would not affect the process of negotiations that they seek .
” The Pakistani army has done a great sacrifice to protect the nation from the threat of terrorism and cowardly acts of terrorists will not be able to affect the morale of our soldiers , ” Sharif said in a statement .
Pakistan has said it will free up one of the senior leader , Mullah Abdul Ghani Baradar , although the exact date of the release has not been announced .
Previous seven Taliban prisoners who will be released , as a step to support peace efforts with the Taliban .
Pakistani Taliban group that is separate from each other although allied Afghan Taliban .

In India, A British Man Trampled...