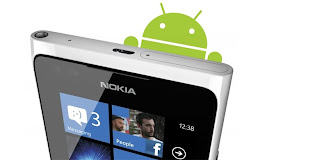 Nokia rumored several times to use Android on its Lumia series devices . However , the Finnish company has always denied interested in using Google’s mobile operating system is .

Continues to be debated , the news about the possibility of finally sunk by itself . Moreover , Nokia devices division , which produces Lumia devices , eventually purchased by Microsoft . Nokia hopes vanished fans who want to see the Lumia devices based on Android .
As reported by the New York Times , Saturday ( 09/14/2013 ) , although always denied , Nokia apparently , before being acquired by Microsoft , ever thought of using Android
Less competitive Windows Phone platform this time , far less than the leader of the world ‘s mobile operating system , Android is suspected to be the reason Android Nokia want to gush .
Nokia also has not been in the stage of just thinking about the possibilities . Android -based device Nokia had planned to be circulated by the end of 2014.
This revealed two sources told the New York Times , a team at Nokia had already tried to apply Android on Lumia devices . These two people are not willing to be named because the project is very confidential .
Interestingly, Microsoft also aware of this secret project .
With the acquisition of Nokia by Microsoft’s devices division , is still possible that the Lumia smartphones come with Android ? A source reveals another , the idea of ​​using Android on Nokia devices are not discussed when negotiations between Nokia and Microsoft .
This could mean Microsoft did not rule out the use of Android in the future . However , do not expect that the process of acquisition between Nokia and Microsoft will be completed in 2014 .
Microsoft still has plenty of time to think about the strategic plan for Nokia , if only to use Windows Phone only or finally relented and released the Nokia Lumia Android .
Representatives of Nokia and Microsoft is still refusing to comment .