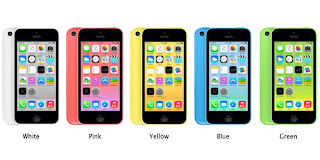 Public expectations of the iPhone will be available at affordable rates vanished . iPhone 5C predicted ( by the media ) as a cheap iPhone turned out to have a price that is not exactly cheap is affordable .
Before its emergence , 5C iPhone price is approximately 400 U.S. dollars to 500 U.S. dollars . In fact , including the iPhone 5C still relatively ” expensive ” price range reached 549 U.S. dollars, or USD 6.2 million for the 16 GB version without a contract . ( Read : ” What is the price of iPhone 5S and 5C ? ” )
Not only gadgets that disappointed users , investors were disappointed . Investors assess the price of the iPhone 5C too expensive . Apple’s stock was listed had declined 5 percent a day after the launch of the iPhone 5S and 5C .
The question is , why Apple has not or does not want to issue a mobile phone with cheap price ? Though competitors , Android , dominate the global smartphone market share by relying on cell phones to low- medium price .
Apple was never indicated that the lower-middle market is one of focus . The company assumes no need to pursue market share .

Apple is still strong
Why so ? Jay Yarow of Business Insider believes that iPhone products is still strong in terms of business and continues to grow by 20 percent in the last quarter , despite facing competition from rivals , such as Samsung Galaxy S4 .
iPhone can sustain growth , further Yarow , because the iOS platform is still considered the most attractive in the eyes of users in general . This operating system is simple , easy to understand , and has a strength in terms of quality and quantity of applications .
Apple will also begin bundling iWork productivity applications along with the iPhone , as an offensive move against Microsoft Office and Google Docs .
In addition , the company offers a complete package of products , both in terms of hardware , software , and services are believed to give more value to the iPhone , unlike Android phone manufacturers who do not have much choice in the differentiation beyond the selling price .
factor applications
In developed countries the market segment that became important for application developers , the number of active iOS users – seen from the data traffic Quantcast internet – still more than the Android , although its market share is inversely proportional numbers . Users in this market is more active than users download applications in developing countries .
Because of that , Apple is not worried about losing market share in areas that are not too active to download the iOS app . After all , the developer still think iOS as the main platform to find income .
Therefore , cheap iPhone was deemed incompatible with the aim of Apple , which is not interested in widening the market share . In this case , contrary to the belief Apple investors . Which is correct ? Only time will tell .