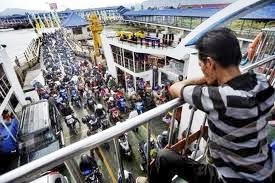 Jembrana –  Vehicle queues returnees were on their way to Java via Port Gilimanuk, Jembrana, Bali, reached 8 kilometers specifically for this type of car on Saturday (3/8) night. Monitoring on Sunday afternoon, a line of cars still going to the “Al Mubarok” Mosque, Gilimanuk or about 1.5 kilometers from the port. At the peak, these vehicles reach the village line Sumbersari, District Melaya.

While travelers who use motorcycles, relatively more smoothly towards the harbor. The longest queue they are only 1.5 kilometers.

“For motorcycles, is now located in a tent right on the in front of harbor. Looking at the quantity of vehicles that come in, we predicted peak flow back and forth going on today, until tomorrow,” said police chief Gilimanuk Sea Region, Commissioner Made Prihenjagat.

While the Business Manager of PT ASDP Indonesia Ferry Gilimanuk, Susianto Wahyudi said it adds the operating ships from 32 units to 37 units. He also said the H-5, an increase in the number of passengers and vehicles compared to last year.

For passengers reached 60,777, increase 28 percent on the same day last year, increase 51 percent motorcycle reached 15 846 units and four-wheeled vehicles that cross as many as 5,298 or 13 percent.