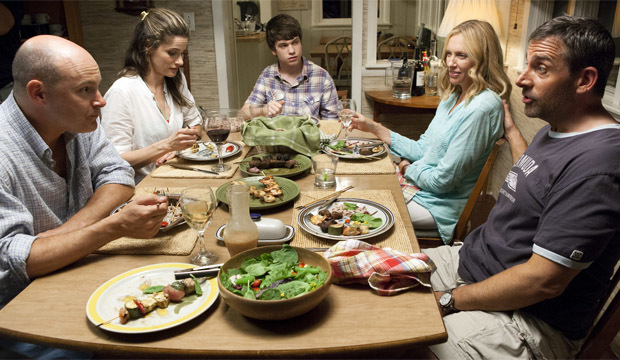 About 10 minutes into The Way Way Back, young Duncan (Liam James) reaches into his jacket pocket, and pulls out a pair of white iPod ear phones. It came as a surprise, because until that moment, I thought I was watching a film set in the mid-1980s. Potential stepdad Trent (Steve Carrell) is driving a perfectly restored-era station wagon, and all of the cast are wearing the exact same chinos/jeans/plaid and T-shirt combinations that every American movie family going on a summer holiday in the last 40 years has worn. If you pulled out a DVD of Jaws – a film set in a near-identical beach side holiday village to the one shown here – you wouldn’t notice any significant differences in the character’s wardrobe. It may seem like a small point to make, but it’s only one of several signifiers that writer/directors Nat Faxon and Jim Rash are quite deliberately nodding to the classic adolescent-comes-of-age films of 1970s and 80s.

When we first meet Sam Rockwell’s Owen, the well-meaning eternal teenager who will take Duncan under his wing, he is playing on a Pac Man machine. Not a smartphone app Pac Man, but a genuine 1980s put-a-dime-in-the-slot standup machine, in a diner. Likewise, the water park that Rockwell works at ”hasn’t been changed since 1983”, he tells Duncan. Later in the film, Duncan will repeat the line, just to make sure that us cloth-eared doofuses in the audience have got the point. Yep, we get it. The Way Way Back is a film about embracing your past, cunningly dressed up to look like a film about overcoming your present. Which, I guess, makes it a film about both, which is going to hold a lot of appeal to a lot of people.

There is just so much to like here. As the adult leads, Carell, Collette, and Rockwell really couldn’t be bettered. Carell is cast, for the first time in memory, as an absolutely loathsome character. His Trent is an oily, bullying, duplicitous creep. There’s enough glib superficial charm there to make him briefly attractive to Collette’s struggling single mother, but we know that Trent will get his comeuppance, and we wait happily for it to arrive. Collette likewise is layered and subtle in a role a lesser actor, or script, could have made shrill and demeaning.

But, as with Faxon and Nash’s screenplay for The Descendents, (they co-wrote with director Alexander Payne), it’s the kids that set this film apart. Faxon and Nash place their young cast right on the cusp of adolescence, and then allow the events of one summer to push them across the line. We know that this is a coming of age yarn, and we perhaps know how it will unfold, but The Way Way Back is generously and insightfully done. The film might not have quite the emotional heft or ambition of The Descendents, but it is still a captivating and often very funny couple of hours. Very recommended.

Stand by Me Doraemon, Akhir Cerita...