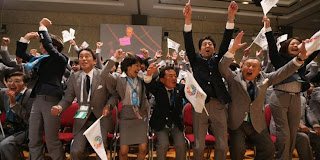 Tokyo finally won the competition to host the 2020 Olympics. The capital of Japan‘s defeat Istanbul (Turkey) in the last round of voting, at a meeting of the International Olympic Committee (IOC) in
Buenos Aires, Argentina, Saturday (07/09/2013).

Prior to this, Tokyo has never hosted the summer Olympics in 1964. Japan has also hosted the Winter Olympics in Nagano in 1998. Tokyo run for a fourth time, with two unsuccessful attempts in 1960 and 2016.

Tokyo had doubted could win the competition against Istanbul and Madrid, with consideration of security reasons. However, the delegation led by Princess Takamado managed to convince many IOC members that Japan is now in a safe and stable condition to host the biggest sporting event in the world.

The presentation was very emotional and Tokyo representation has attracted a lot of noise, which makes Madrid directly eliminated in the first round of voting. Madrid run for the third time in a row.

In Order to Pregnant A Baby Boy