Home WorldAfrica A Bus Plunged Into The Valley of Guatemala
Africa 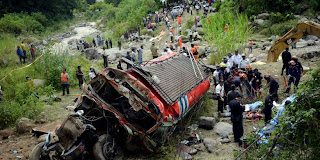 An overcrowded bus plunged into a deep river valley in northwestern Guatemala, Monday (09/09/2013). At least 44 people were
killed in an accident on route to the Guatemalan capital.

Authorities set up an emergency morgue to identify the bodies of the victims. Among those killed are children and at least three babies. Volunteer fire brigade spokesman Mario Cruz, said, in addition to the dead, there are also 46 people injured were rushed to a local hospital for treatment.

Bereaved families meet emergency morgue location. Marcos Rene Zet (17) is one of them. This girl crying outside the tent where an autopsy took place due to loss of mother, two sisters, and three nephews in the accident as well. “My mother said she would to the capital city to buy food. He sold outside of school meals,” said Zet while awaiting news.

Cruz said at least 90 people aboard the ill-fated bus when the accident occurred. The bus had its official capacity of 54 passengers only. The bus driver, Yony Cumar Cana, became one of the dead.

Bus is “free fall” into the valley of the river is 200 meters down the road on Monday morning. Bus driver allegedly lost control while passing through the bend. “From what we have seen, the bus crashed into a rock wall first and then fall in a cliff,” said Mayor Otto Vielman.

The area has a lot of dirt roads in the mountains steep and windy. Most roads do not have a fence or other security. In 2000, according to Vielman, a similar accident killed 40 people.