Home WorldAfrica A Student Hit The Teacher with Broom
AfricaWorld 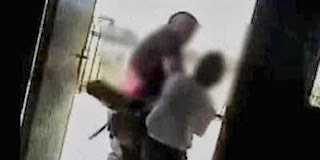 A student at a school in South Africa caught on camera attacking his teacher using a broom. In a video uploaded to YouTube‘s website, seen the students kicked and struck a man using a broom teacher in a school classroom in Glenvista, Johannesburg.
When students were to perform an action, other students heard cheering, laughing, and stirring up the students to continue to hit the teacher.

“Hit him,” came the voice of a student.

Teacher who attacked, looks relented and tried to leave the school building. However, the students are still holding up brooms chased onto the highway.

This disgraceful action makes the Minister of Basic Education Angie Motshekga concerned and condemned the action.

Minister Angie even ordered that the student with the entire class cheered get penalized.

“Student‘s with his friends who cheered should be punished,“ he added.

In addition to proposing penalties, Minister Angie Motshekga said that all those who saw the attack should get counseling related trauma.

He added that such violence would not be tolerated by the other students and the entire school in South Africa.

“School should be a non-violent zone where teachers and students feel safe so that the learning process can take place,” said Angie.

In India, A British Man Trampled An Elephant