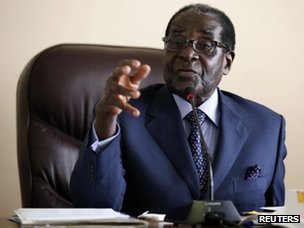 Robert Mugabe is to deliver his first public speech since he won Zimbabwe’s disputed presidential election. Mr Mugabe will address a Heroes’ Day celebration in the capital, Harare, to commemorate those who died during the country’s war of independence. The Movement for Democratic Change of his main rival, Prime Minister Morgan Tsvangirai, is boycotting the event. The party has lodged a legal challenge against the result of the “stolen election”, demanding it be rerun.

Mr Mugabe won 61% of the vote in the election on 31 July, while Mr Tsvangirai came second with 35% and Welshman Ncube third with 3%, according to official results.

The president’s Zanu-PF party also gained a parliamentary majority of more than two-thirds on the same day, winning 160 of the 210 seats.

Heroes’ Day is Zimbabwe’s proud annual celebration, when the country remembers those who died during the 1970s fighting for independence, reports the BBC’s Mark Lowen in Johannesburg.

On Monday, Mr Mugabe will make a speech at National Heroes’ Acre, the monument in the capital where some of those killed are buried.

Our correspondent says the 89-year-old president’s addresses are traditionally full of his firebrand nationalist rhetoric targeting the former colonial power, the UK, but he is also likely to laud his landslide victory in the last month’s election.

The MDC is boycotting the event in protest at what it says was massive vote rigging by Zanu-PF, so this Heroes’ Day will have political overtones too, exposing the deep rifts at the heart of this troubled country, our correspondent adds.

Mr Mugabe has not yet been sworn in for a seventh consecutive term, since the appeal is ongoing. He maintains that he and Zanu-PF won free and fair elections.

The MDC has said it has “strong evidence of electoral irregularities”, including bribery, abuse of “assisted voting”, and manipulation of the electoral roll.

African and regional monitors praised the poll for being peaceful but noted some irregularities.

But a local observer group, the Zimbabwe Election Support Network (Zesn) and its network of 7,000 observers, said that about one million voters – mainly in urban areas – were “systematically disenfranchised” by being omitted from the voters’ roll or turned away.

The nine-member Constitutional Court is expected to discuss the complaint this week. It has up to two weeks to deliver its verdict.

But, with several judges being supporters of Mr Mugabe, our correspondent says few expect the MDC challenge to bear fruit.

In a separate development on Sunday, state radio reported that the ministry of mines had denied a report in the Times newspaper that it had agreed to sell Iran uranium for its nuclear programme.

A ministry statement was quoted as stressing that the report was “a malicious and blatant lie”, and that no export licences had been issued.