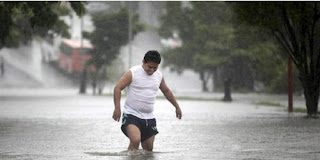 Mexico is facing two severe storms, one on the east coast and one on the west. Authorities say more than 5,000 people have been evacuated from the Atlantic seaboard before the coming storm that Ingrid has a speed of 120 kilometers per hour.

Cyclone Ingrid is expected to cause rivers to overflow and create flash floods and landslides. It can also cause a storm surge will raise water level of 0.6 meters to 1.2 meters above normal.

Most of those who were evacuated live in official camps, while others fled in a friend’s house and relatives.

The government said two of the three main oil exporting ports closed, although the oil port of Veracruz near the Gulf as still open on Saturday (14/09) when the storm approached.

BBC correspondent, Will Grant, in Mexico City said the cyclone Ingrid is the second big storm that is gathering strength in the Gulf of Mexico, and is considered to be a serious impact on in some areas.

Meanwhile, on the west coast of the Pacific, a tropical storm has hit and Manuel brought more heavy rain twice in three days. The state of Oaxaca, Guerrero and Chihuahua into the areas most severely affected by access roads and telecommunications are paralyzed.

Typhoons and storms hit Mexico a few times. In 2007, Hurricane Dean swept lowlands and the ruins of the ancient Mayan culture. While in 2005, Hurricane Wilma hit Cancun tourist area.