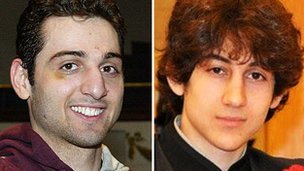 One of the brothers suspected of carrying out the Boston bombings was in possession of right-wing American literature in the run-up to the attack, BBC Panorama has learnt.

He also had reading material on mass killings.

Until now the Tsarnaev brothers were widely perceived as just self-styled radical jihadists.

Panorama has spent months speaking exclusively with friends of the bombers to try to understand the roots of their radicalisation.

The programme discovered that Tamerlan Tsarnaev possessed articles which argued that both 9/11 and the 1995 Oklahoma City bombing were government conspiracies.

Another in his possession was about “the rape of our gun rights”.

Reading material he had about white supremacy commented that “Hitler had a point”.

Tamerlan Tsarnaev also had literature which explored what motivated mass killings and noted how the perpetrators murdered and maimed calmly.

There was also material about US drones killing civilians, and about the plight of those still imprisoned in Guantanamo Bay.

‘A Muslim of convenience’

The Tsarnaev brothers, ethnic Chechens, spent their early years moving around a troubled region of Russia torn by a violent Islamic insurgency.

But for the last decade they lived in Cambridge, near Boston.

The brothers’ friends told us Tamerlan turned against the country and became passionate about Islam after becoming frustrated when his boxing career faltered because he did not have American citizenship.

Their friends wouldn’t all speak openly because they were afraid of being wrongly viewed as associated with terrorism.

‘Mike’ spent a lot of time in the brothers’ flat.

“He (Tamerlan) just didn’t like America. He felt like America was just basically attacking all Middle Eastern countries…you know trying to take their oil.”

A spokesperson for Tamerlan’s mosque in Cambridge, Nicole Mossalam, said Tamerlan only prayed there occasionally. She portrayed him as an angry young man who latched onto Islam.

“As far connecting with the Islamic community here, to actually praying, being involved, doing acts of charity….all of those were pretty much lacking.

“I would say he was just a Muslim of convenience,” she said.

Dzhokhar Tsarnaev, Tamerlan’s younger brother who has been charged with the bombings, scrawled a note shortly before his capture stating “We Muslims are one body. You hurt one you hurt us all.”

The brothers had been reading militant Islamic websites before the bombings.

‘Tito’ told us Dzhokhar’s older brother dominated him and didn’t approve of his “party lifestyle”.

“He (Dzhokhar) was intimidated, that would probably be the best word. He took him very seriously. He was an authority.”

The FBI has been investigating the brothers, and possible connections Tamerlan might have had in the troubled Russian republic of Dagestan which he visited last year.

The House Intelligence Committee in Washington is being briefed on his connections.

The committee chairman, Mike Rogers said he believes the brothers’ mother, Zubeidat Tsarnaev, was involved in his radicalisation.

“He had family members encouraging, we know that for sure,” he said.

Tamerlan was killed in April following a gun fight with police which ended when his younger brother ran him over while trying to escape.

If convicted he faces life imprisonment or the death penalty.

US to extend some embassy closures for up to a week