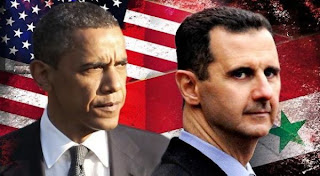 President of the United States (U.S.), Barack Obama considers the intention of its chemical weapons Syria handed to the UN as a
victory. Obama reasoned, Syria will not be soft without the threat of attack from the U.S.

Proposals for chemical weapons Syria handed to the UN first proposed Russia. In return, Russia called on the U.S. and its allies abandon plans to attack Syria.
Russian proposal immediately welcomed by the U.S. Obama promised to cancel the attack if the proposal could be realized.

“Obviously (it will stop the attack), if the facts (no chemical weapons) do exist,” said U.S. President Barack Obama.

Syrian government itself approved the proposal after making contact with the Russians. Syrian Foreign Minister Walid al Moualem states, Syria willing to give up his chemical weapons to avoid bloodshed.

“We accept the Russian proposal on the basis of our concern for the safety of the people and the country,” said Moualem.

Lamb Of God Banned To Shown in Malay