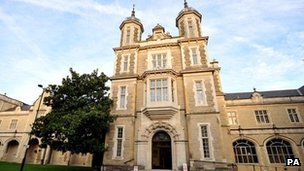 The Crown Prosecution Service has criticised one of its barristers for describing a 13-year-old sex abuse victim in court as “predatory”. Robert Colover QC also called the girl “sexually experienced”. The CPS said his language had been “inappropriate”. Neil Wilson, 41, admitted abusing the girl at his home in Romford, London, and was given a suspended jail term.

The Attorney General’s Office said the sentence had been drawn to its attention as “possibly unduly lenient”.

Details of the case come as the head of the judiciary in England and Wales says a select pool of judges with specialist training will be created to handle complex child abuse cases, amid concerns at the way some child witnesses are treated in court by lawyers.

The police were alerted to the actions of Wilson, who now lives in York, after his victim had told a friend. Images of child sex abuse were also found on Wilson’s computer.

Wilson later admitted two counts of making extreme pornographic images and one count of sexual activity with a child.

Mr Colover, who was representing the CPS at Wilson’s sentencing hearing at London’s Snaresbrook Crown Court on Monday, said: “The girl is predatory in all her actions and she is sexually experienced.”

The judge, Nigel Peters, said that when deciding Wilson’s punishment, he had taken into account the prosecution’s comments that the girl looked and behaved older than she was. Wilson’s eight-month jail term was suspended for two years.

“The transgressor in this case was the defendant and he bears responsibility for his criminal acts.”

Alan Wardle, head of corporate affairs at the NSPCC, told BBC Radio 4’s Today programme: “The age of consent in this country is 16, before that a child cannot consent. As a society we have drawn a line in the sand on that.

In a statement, the Attorney General’s Office said: “The case has been drawn to the attention of this office as a possibly unduly lenient sentence.

“This means it’ll be considered by a law officer (the Attorney or Solicitor General) who will decide whether it should be referred to the Court of Appeal under the unduly lenient sentence scheme.”

It said a decision would be announced once files relating to the case had been considered.

Alison Worsley, of children’s charity Barnardo’s, said: “It is plain wrong to imply in any way that the experiences of sexually exploited children are something they bring on themselves.

“It is difficult to imagine the torment experienced by the vulnerable victims of crimes such as these.”

She added: “It takes immense bravery for these young people to relive their ordeal in a court of law and we must not forget that it is the abuser who is guilty and not the victim.”

Mr Wardle said that for some young people going to an open court “feels like being re-abused”.

He said the NSPCC has been calling for such cases to be heard by a small group of specially trained judges.

More than 4,000 people have signed an online petition calling for the CPS to investigate the language used by Mr Colover.

The petition, which was started by a woman named Jo who described herself as a “survivor of childhood sexual abuse”, stated: “It’s unacceptable that the crown prosecutor – the person who this young girl was relying on to help get her justice – used this kind of language in court.

“It’s a sad fact that this kind of attitude is commonplace within society and the legal establishment. We need to make a stand and send a clear message: It’s never the child’s fault.”