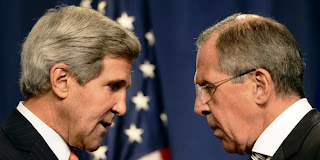 Organization for the Prohibition of Chemical Weapons (OPCW), Friday (09/20/2013), decided to postpone the meeting which will discuss US–Russia plan to destroy chemical weapons Syria.

“OPCW executive council meeting of the Syrian-related problems, which are scheduled on Sunday was decided to be postponed,” the official statement OPCW.

Organization based in The Hague, Netherlands was added immediately announced the new schedule a meeting to discuss the Syrian chemical weapons.

A number of diplomatic source said the delay was due to meeting and U.S. Rudia yet to agree on the meeting materials.

Plans of the two countries agreed it is the rule of President Bashar al–Assad agreed to cede control of its chemical weapons into the hands of the international community.

As an initial step, the Damascus regime must submit a complete list containing all the weapons and chemical weapons development facility on Saturday (21/09/2013).

Furthermore, all of Syria’s chemical weapons to be destroyed in mid-2014.

OPCW main task is to implement the UN convention on chemical weapons, in which Syria urged to get involved in this convention.